to be valid and

a writer must be unafraid to question the status quo and to challenge conventional wisdom with carefully researched facts delivered by an unhesitating voice.

The Arab-Israeli conflict and our global struggle with revolutionary Islam have been my pursuits since 1996, well before these dynamics reached crisis stage.  My written assessments on this subject matter have bucked conventional wisdom and continue to be spot on.

The two articles below concerning Revolutionary Islam, written in 2009, delve into the explosive Arab-Israeli conflict, which threatens the free world, indeed all of humanity.

“But if the watchman sees the sword coming and does not blow the trumpet to warn the people and the sword comes and takes someone’s life, that person’s life will be taken because of their sin, but I will hold the watchman accountable for their blood.” 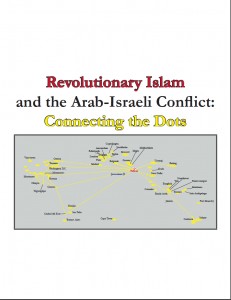 “Revolutionary Islam and the Arab-Israeli Conflict” is a straightforward, fast-reading analysis that debunks five key presuppositions pertaining to Islam.  The article also discusses the Islamist push in the strategic Fertile Crescent Region, particularly as it concerns Israel; and addresses the potential global ramifications if the movement continues unchecked.  My illustrative maps (see sample below), revealing background information, and presentation of ample illuminating Qur’anic material demonstrate Islam’s sinister religio-geopolitical global agenda, and its quest to dominate civilized society and to destroy those who hinder its advance. 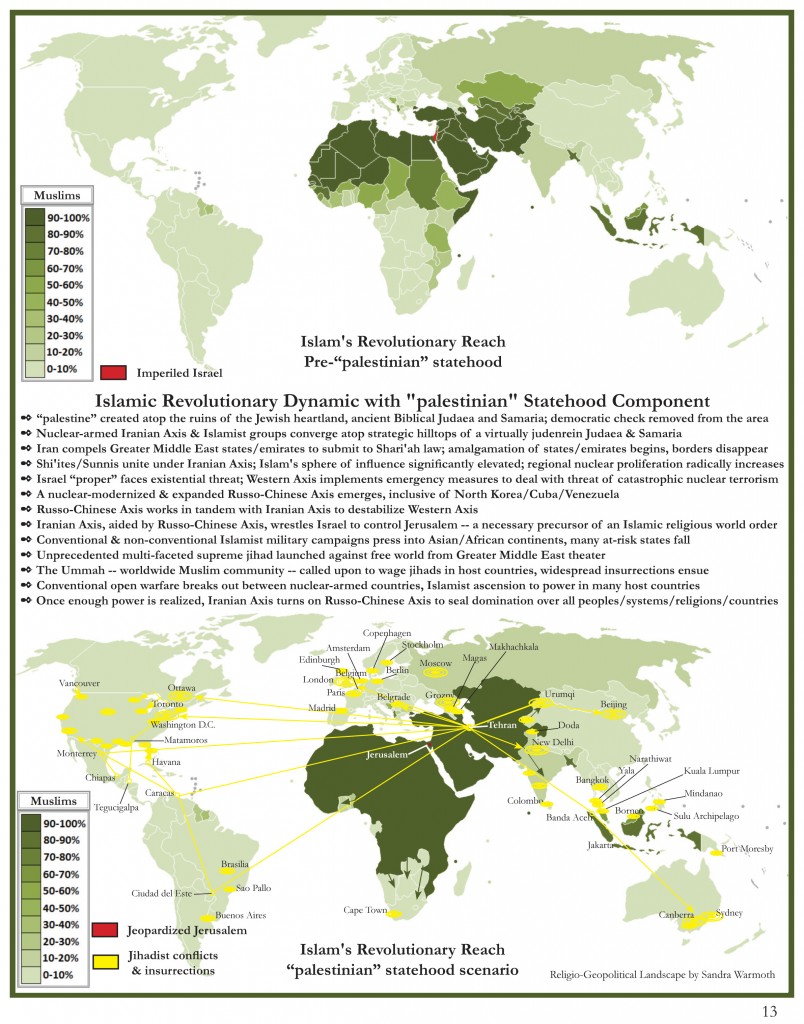 When I created this religio-geopolitical map in 2009, I assessed that Asia and Africa were heading for an amalgamation of borders spurred on by an Islamist push for a caliphate concomitant with the jihadist exploitation of weak states in these regions.  Although there are several ways that an amalgamation of borders and the concurrent rise of a caliphate could arise, my assessment was focused on such an eventuality unfolding in the Greater Middle East after a formal rise of a state of “palestine” in Israel’s ancestral heartland.

In 2014, the world has, indeed, witnessed the initial stages of an amalgamation of borders in Asia, and by June of that year, the embryonic formation of an Islamic caliphate therein; and during this period an ambiguous move toward the same in Africa. 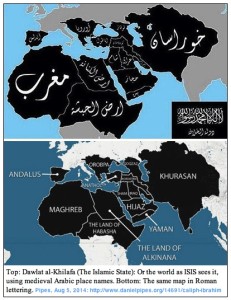 For the sake of comparing my 2009 map with religio-geopolitical events of 2014 spanning these regions, I have included Middle East expert Daniel Pipes’s map.

This professed caliphate requires legitimization among the ummah or global Muslim community before it could be considered official in Islamic circles.  As for the self-proclaimed caliph, Abu Bakr al-Baghdadi, he does command some level of legitimacy because it is believed that his ancestry is linked to the Islamic prophet Muhammad’s Quraysh tribe, and al-Baghdadi reportedly has a doctoral degree with a concentration in critical Islamic studies.  The manifestation of this professed caliphate has come by way of al-Baghdadi’s Al Qai’da-spawned Islamic State (IS) terrorist movement’s insurgency and conquest of large swathes of territory spanning Syria and Iraq; and it is in gruesome keeping with Muhammed’s own bloody campaigns of conquest and capture of booty.  This significant development will certainly energize other Islamist power struggles globally, which are already empowered by global networking, advances in readily available technology, narco-terrorism alliances for state-free financing, and a weak-willed international community.  Consequently, this problem is not going away, and if it continues unchecked, it could very well lead to insurrections and subsequent declarations of captured and held territories, which could then become extensions of the IS caliphate. 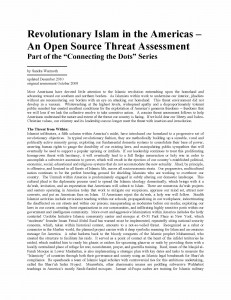 “Revolutionary Islam in the Americas — An Open Source Threat Assessment” provides a survey of selected threats, with a focus on regional threats by Islamists to the U.S. homeland: the regional aspect an underreported subject back in 2009.  This article demonstrates how Islamists are working diligently to stoke anti-Americanism throughout the Americas in preparation for heavily infiltrating U.S. borders in anticipation of a caliphate spanning this region.

Indeed, in 2014, areas of America’s southern border are being breached by a large influx of children illegally trying to immigrate here.  There should be no doubt that the Islamists in the region are watching closely how Americans handle this security situation.  I suspect some of the region’s Islamists have a hand in this development along America’s southern border, particularly because it concerns illicit narcotics groups trafficking these children.  There is cooperation and shifting alliances between the region’s Islamic terrorist groups and its armed narcotics groups. For more on this subject, browse the Graduate Products section of this Web site.

Below are sample blogs that address other aspects of the Arab-Israeli conflict. 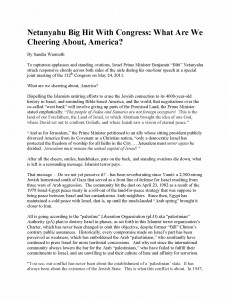 This blog covers a speech given by Israel Prime Minister Benyamin Netanyahu to the U.S. Congress in 2010.